Maadi is a quiet, green area south of downtown Cairo, located on the eastern banks of the Nile. The older, wealthier, and greenest parts of Maadi are inhabited by affluent Egyptians and many North American, European, and Asian residents affiliated with embassies and international corporations. In Lissa, Anna’s father works for a transnational oil company located in Maadi, and Anna attends the American school (Cairo American College) also in her neighborhood. Layla attends the public Egyptian girls’ school in the neighborhood. The Maadi in 2016. Photo taken by Francesco Dragone.

The Lissa artistic, writing, and film team walked through Maadi to gain visual reference material and to visit Anna and Layla’s schools. This is where the bawabeen (doormen) typically live in Cairo. The shack is a small space for a family, but most of the family’s daily activities are performed outside of the shack. 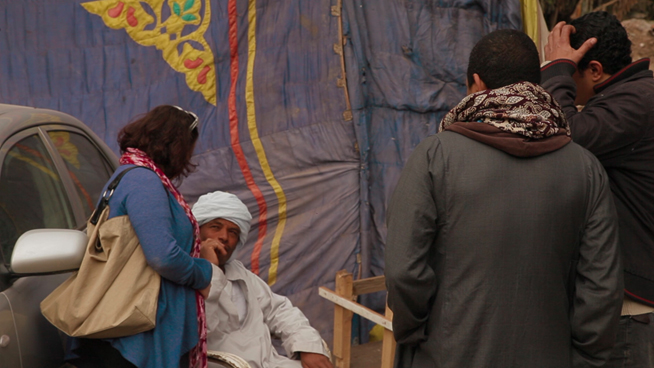 In the more congested apartment buildings in the center of the city, the bawab (or doorman, or porter) often occupies a basement or ground floor apartment of the building he guards. In villas set in more spacious places of the city, such as Maadi, the bawab’s home can be a stand-alone structure adjacent to the courtyard of the apartment building. This structure is a small space for a family, but most of the family’s daily (and even nighttime) activities are performed outside. Anna and Layla grow up in the gardens of the courtyard playing. As she matures, Layla finds other places to study and concentrate on her work.

Daily News Egypt has a short video clip, “Faces of Poverty: A Bawab’s Story,” about the life of a bawab.

Layla’s Hijab: When and Where Does Layla Cover her Hair? 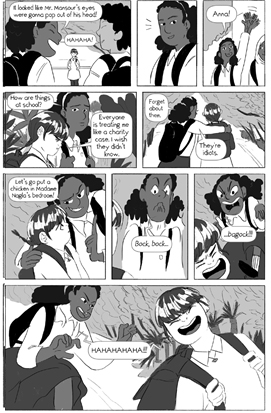 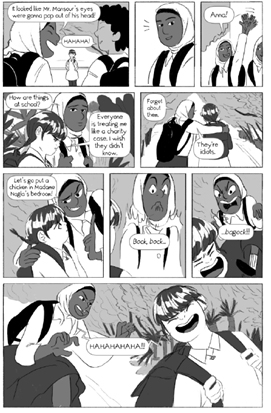 These images depict the same scene; in one (left) Layla is not wearing hijab, but in the other (right) she is. You will see throughout the story that Layla does not cover her hair when she is at home, amongst family members. Layla does cover her hair when she is (a) in public or (b) in prayer. The artists, Caroline Brewer and Sarula Bao, learned about the customs of Muslim women in contemporary Egypt and about when and under what circumstances they would wear a headscarf.

Collaboration between the story writers and artists was especially challenging when changes were made to the script. In earlier drafts of Lissa, this scene occurred when the girls were much younger, so Layla would not yet have been of the age when women would start covering their hair. In later drafts, we placed the girls in middle school, but Sherine forgot to update the art directions, so Caroline proceeded to create the page, as on the left (Sorry, Caroline!). When we looked at the public schools in the Maadi neighborhood where Layla would have gone, we saw that most girls in this time period wear scarves with their school uniforms by middle school (the age of the girls in the final drafts).  Caroline made the corrections, and the final page (on the right) is what is depicted in the book.

As we see with other characters in Lissa, not all Muslim women in Egypt choose to cover their hair. One can discern patterns of likelihood along factors such as geographical location, time period, socioeconomic class, and political persuasion.

During our trip to Cairo, Caroline and Sarula fell in love with all of the friendly street cats that greeted us everywhere we went, from the market in Khan el-Khalili to Tutankhamun’s tomb in the Cairo Museum. As they began drawing scenes from the book, they came up with a great way to incorporate these feline companions: symbolism! Illustrators will often use specific visual devices to tell a deeper story about a character, place, or event. Caroline and Sarula decided to have the cats symbolize Anna and Layla’s friendship.

In these first two pages, cats appear in scenes that echo Anna and Layla’s playful, warm, and supportive moments in their close friendship. 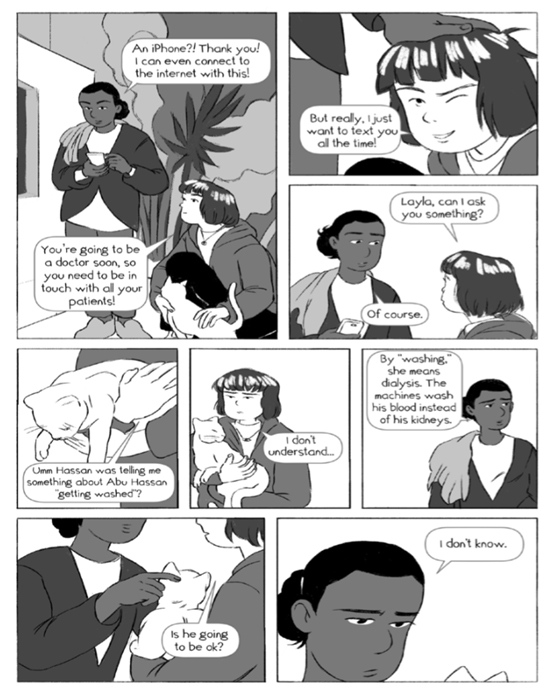 In a pivotal moment of misunderstanding that marks the beginning of a gulf between the women, we see the cat move away and then abruptly depart in the final panel. After this scene, as the distance between the women grows, cats are noticeably absent from their time together. 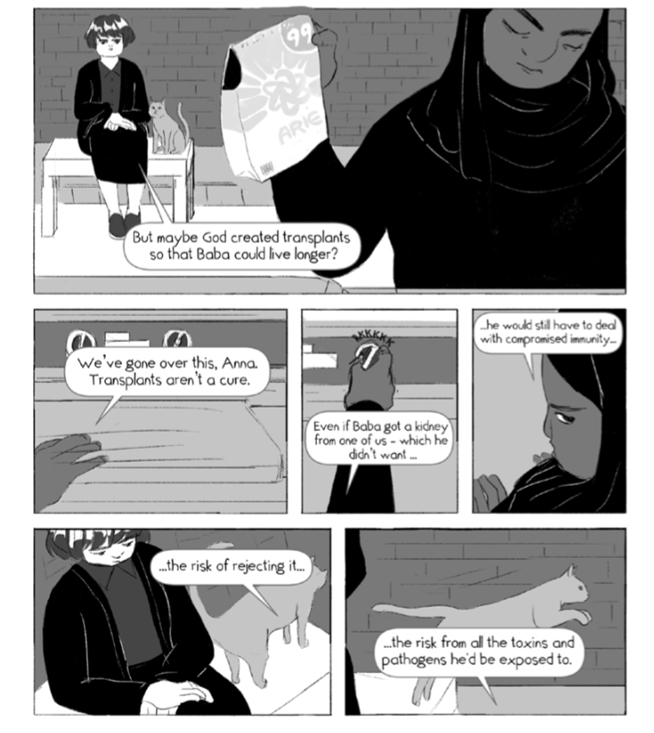 As tensions begin to resolve, the cats reappear. First, they show up on Anna’s desk, sitting side by side as a symbol and reminder of enduring friendship when Layla calls in a moment of need and Anna rushes to support her. And then, as the women visit Abu Hassan’s grave, a cat brushes past their feet, present yet aloof, as it foreshadows the beginning of a resolution. 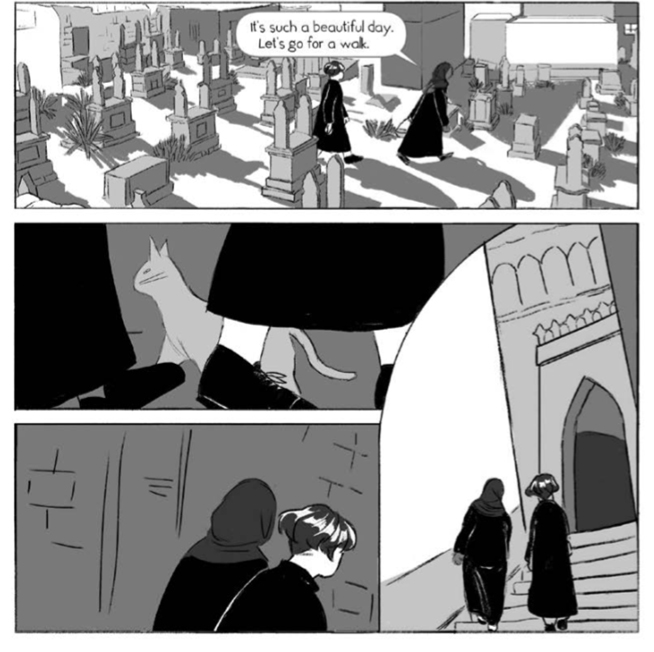 Finally, when both women fully understand each other and move past their differences, a cat sits in the foreground, happy, relaxed, and preening itself. Ganzeer’s “Cat of Defiance” on the final page visually echoes the cats who moved through Anna and Layla’s friendship. In this piece, we also see the cat imagery extend to revolutionary actors: the bandages on the cat’s injured eye reference Ahmed and others who lost their eyes to state violence, and the characteristic wings of martyrdom commemorate those who died for the cause. 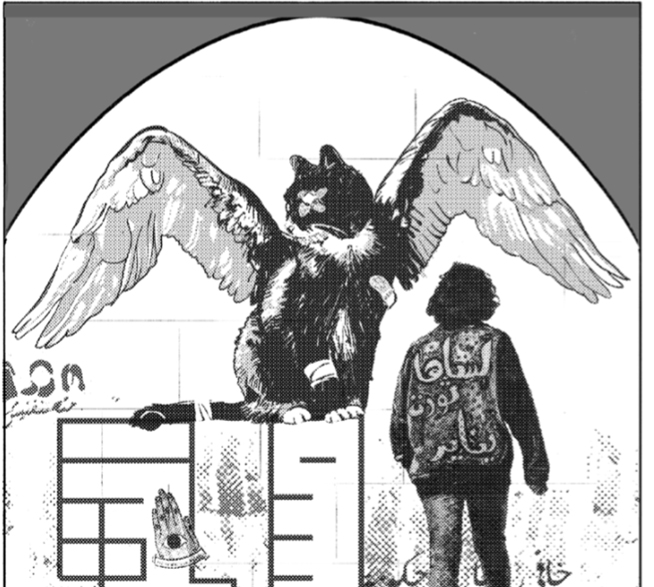 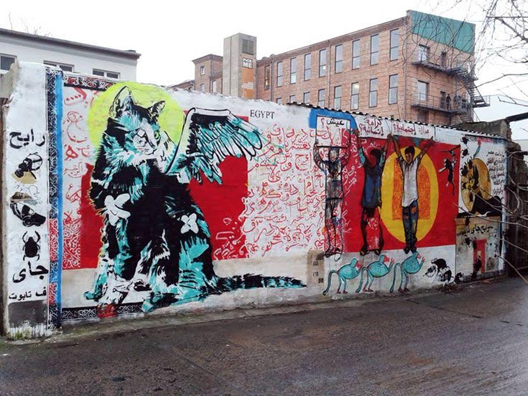 As young girls in Cairo, Anna and Layla strike up an unlikely friendship that crosses class, cultural and religious divides